Storebro is a well-known industrial village dating back to 1728. Since 1915 it has been the site where the largest production of machine tools has been made in Sweden.  In 1933 Mr. Ivar Gustafsson founded the company Ornmaskiner, which later merged with Storebro Bruks AB.

Under his leadership, a total number of 40 000 machine tools were manufactured and sold to customers in 77 countries around the globe. Over time, many additional brands have been incorporated to the Storebro Company. The most known include: Koping, VMA Varnamo, Malcus, Thule, TLV, Beijer, Holms.

A comprehensive stock is still available and parts can be supplied for different kinds of machines dating back as far as to 1915. 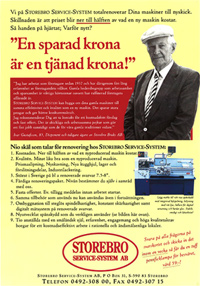